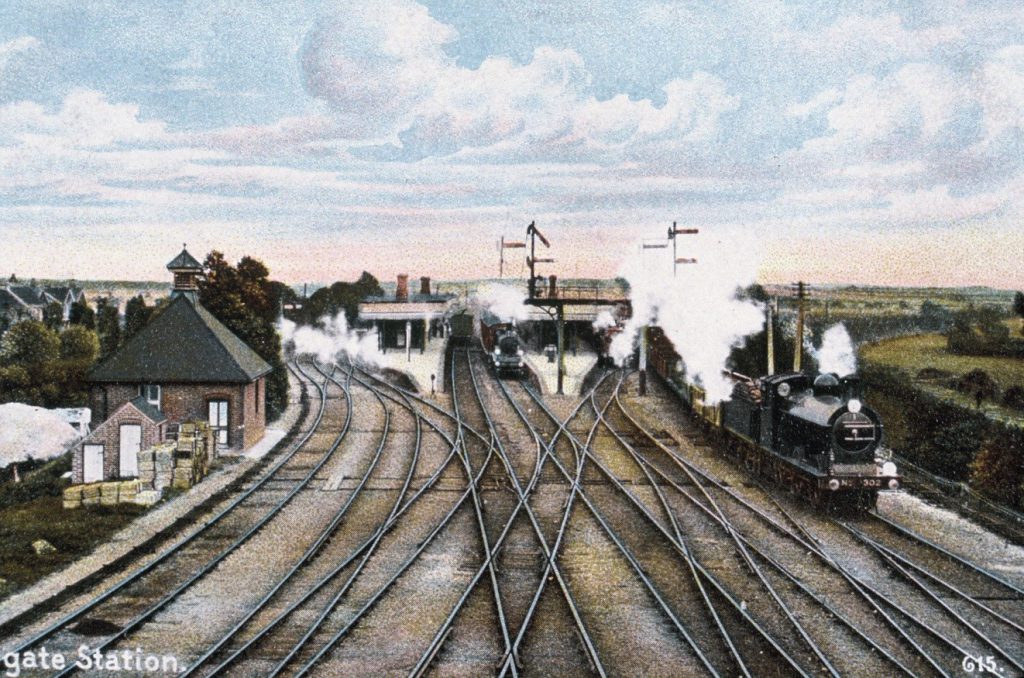 The Cuckoo Line was built by the London Brighton and South Coast Railway (LB&SCR) in two sections, starting with the branch from Polegate to Hailsham which opened to traffic on 14 May 1849. The remainder of the line to Eridge was engineered by Frederick Banister, and opened to traffic to Heathfield on 5 April 1880 and onwards to a junction with the Lewes/Uckfield to Tunbridge Wells/London line, just south of Eridge in September 1880. The “Queen Anne” cottage style station buildings with mock timber framing and Tudor chimneys, patterned plaster panels and stained glass were designed by Banister’s son-in-law, Thomas Myres. At the same time, a new track alignment was built at Polegate allowing trains to run between Tunbridge Wells and Eastbourne. Many of the stations were some distance from the community they purported to serve and eventually new settlements grew up around the stations at Horam and Heathfield with the latter becoming the busiest on the line. Freight, especially coal inwards and bricks, timber and agricultural produce especially milk outwards, were far more profitable than passengers.

At Hellingly, a unique electric tramway was built in 1903 to connect Hellingly station to the new asylum. A small wooden platform was built at Hellingly railway station, opposite the main line platform. This had no connection to the station buildings and was used only for the transfer of passengers between main-line and hospital trains, and kept chained off when not in use. At Heathfield, the digging of a well next to the tunnel to provide water for locomotives, accidently hit a pocket of natural gas which was subsequently used to light the station. 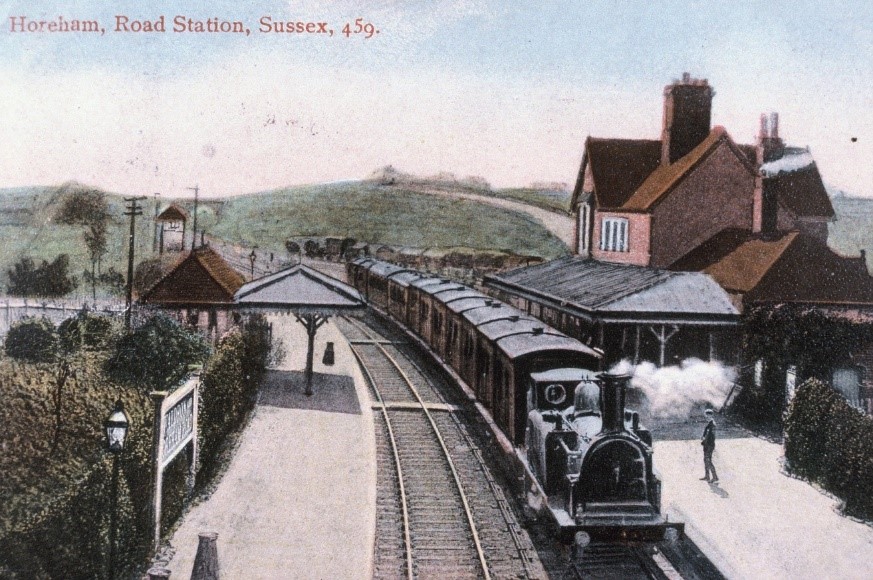 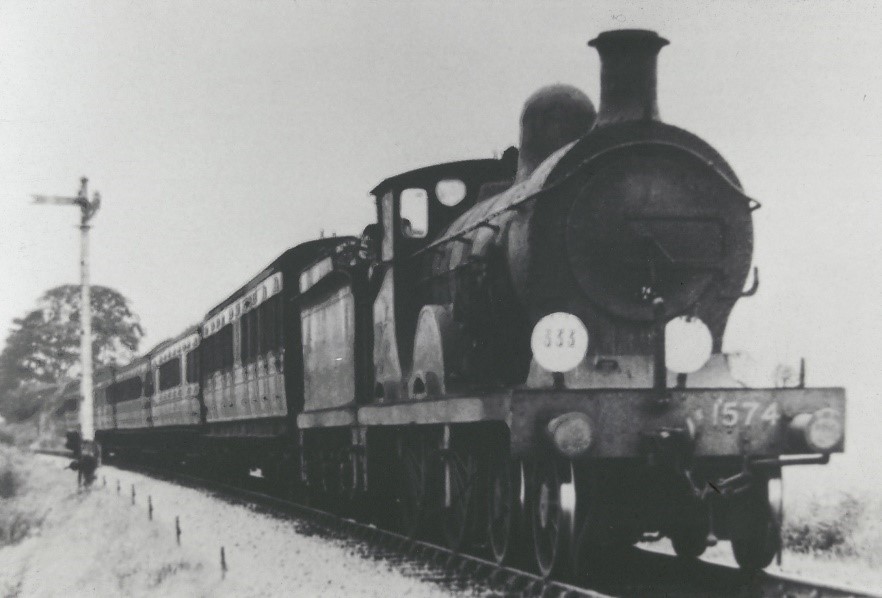 The line had a good safety record: there was only one reported serious accident. On 1 September 1897, 2 miles north of Heathfield, the 08:18am service from Eastbourne was running late and was trying to pick up time in order to meet a connecting train at Groombridge. As the train entered the curve at around 40 mph it left the tracks. Driver James McKinlay was killed and Fireman Lewis Minns seriously injured, whilst 30 passengers suffered minor injuries. At the subsequent inquiry, the main cause of the accident was found to be excessive speed as the driver was attempting to make up lost time. However, the track itself was in poor shape with many rotten sleepers and “curves having irregular elevation” which contributed to the accident. Following the inquiry, much of the track was relaid and the train scheduling was altered.

At the ‘Grouping’ in 1923, the railway passed into the control of the Southern Railway. When the Southern Railway was nationalised in 1948, the line became part of the Southern Region of British Railways. By this time the arrival of regular bus services and the easy availability of road lorries after World War 1, had significantly reduced the available traffic. Despite this, the line remained fully signalled and staffed with few economies being sought to counter the drop in traffic. 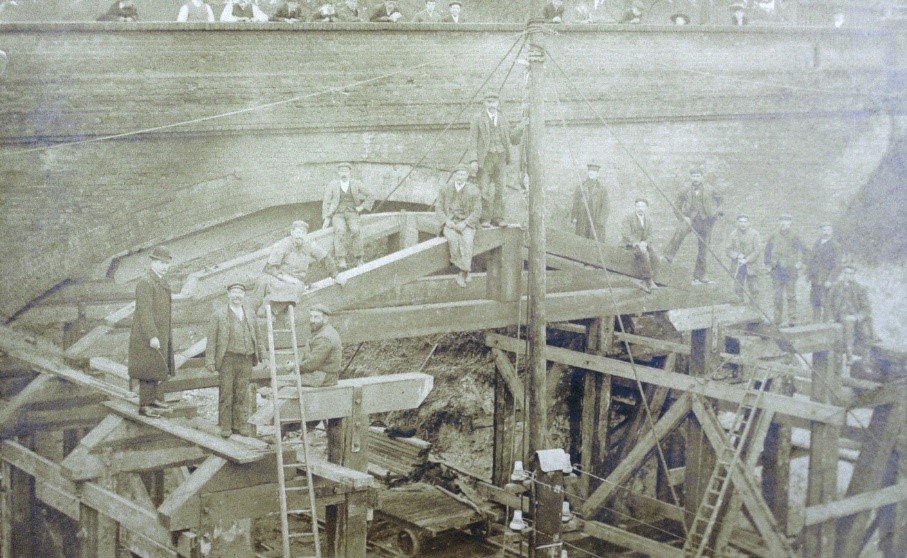 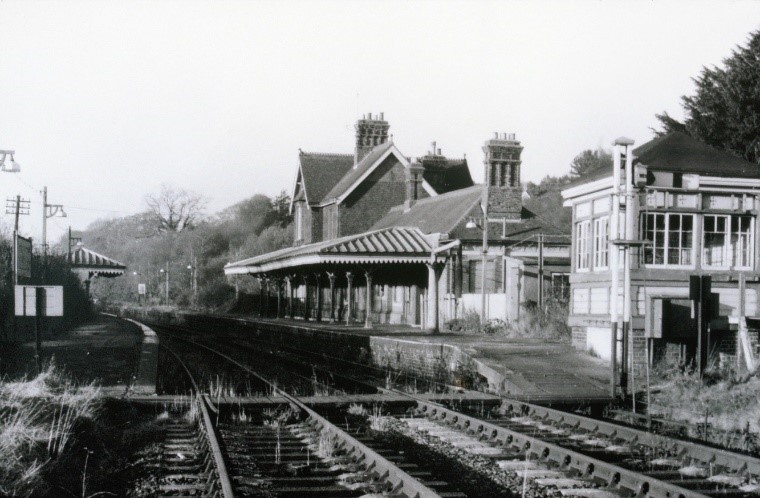 Following the Beeching Report in 1963, the line was recommended for closure. The section from Eridge to Hailsham was closed to passenger traffic in 1965 with the section between Heathfield and Hailsham remaining open for freight until 1968. In April 1968 a lorry collided with a low road bridge under the line at Horsebridge north of Hailsham damaging the bridge causing immediate closure of this part of the line as it was not considered worthwhile repairing the bridge. Passenger services between Polegate and Hailsham remained open until 8 September 1968. The closure of this section was hotly disputed – even British Railways itself agreeing that Hailsham was a growing town and that buses would be unable to cope with the demands of the increasing population – a situation even more true today.

The line was left to its own devices until the early 1990’s when a partnership between Wealden District Council, East Sussex County Council, English Partnerships and Sustrans partnership recognised the potential for development and constructed the Cuckoo Trail. It was one of the first sections of the National Cycle Network to be constructed and completed. The Cuckoo Trail currently extends from Heathfield to Polegate with an extension to Hampden Park in Eastbourne. Today the Trail is jointly operated by Wealden District Council and East Sussex County Council.